END_OF_DOCUMENT_TOKEN_TO_BE_REPLACED

1951 to 1971 vs. 1991 to 2011- Thoughts from the Byron Bay Surf Festival I recently spent the weekend at the Byron Bay Surf Festival with my son Finley and good friend Sandy Haynes. We piled up the van with a load of new wooden surfboards and alaias and hit the road south. The festival theme, “Surf Culture Now!” is a great concept and one that struck a chord with me. The list of scheduled events was long, varied and full of free, low key happenings. There was an innovative art competition aimed at kids. There were various exhibits, live music and talks. Talk topics ranged from Breathing for Free Diving, to Pilates for Surfing and guest author Tim Baker on his new book. Saturday was a chill out day for us, checking out the program and catching up with friends. On Sunday there was a very large surfboards display and expression session on the beach at Wategos. I brought my wooden surfboards down and with Fin and Sandy’s help; we set up a bamboo shack on the sand. There were hundreds of surfboards on display from top Australian shapers and one thing was very clear – from the very wide range of boards displayed - surfboard design is alive again! 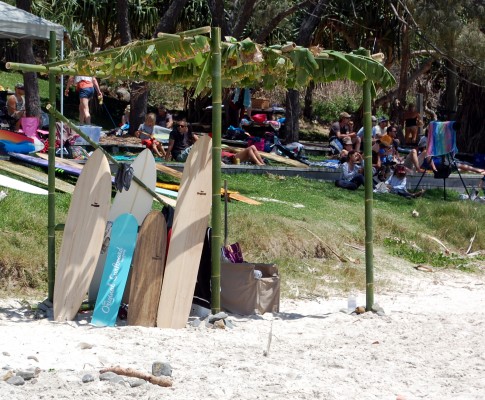 I was reminded of when I was a young surfer growing up in California in the 1970’s. There were so many boards! Most garages had 60’s longboards or at least a paipo. There were all the goofy transition surfboards as well as eggs, bonzers, hulls, knee boards, guns… At that time the 1960’s were not a distant memory. There were even some solid planks and kook boxes around from earlier times. In 1976 I clearly remember a guy riding across a wave so fast on a redwood plank that I just couldn’t believe it. Lots of surfboards were being tested. Change and diversity was embraced. We all went berserk when we saw Mark Richards on a twin fin riding small California-like waves (for me it was 1977 I think). Imagine all the phases surfing went through from 1951 to 1971. It started with redwood planks with some small fins. For the lifeguards it was all about the toothpicks (plywood hollow surfboards). At this time the surf community was small with just a few surf clubs. Then balsa became more user friendly with polyester resin and Dale Velzy’s glasser put the fin on the wrong end of the board and sparked the hot dogging era. Gidget became a top 10 best-selling book and movies ran with the surfing theme. The Beach Boys were arguably the most popular rock band in the world and surfing exploded in popularity. Bruce Brown cast the new mould for the surfer with Endless Summer, and surfing headed main stream with the development of easily produced foam surfboards. The noseriding era lasted for quite a few years where style was supreme. Soon, George Greenough, Bob McTavish, Brewer and many other shapers wanted more control in bigger waves and the shortboard revolution was on. Grubby Clark opened the doors to selling foam surfboard blanks direct to the public for cheap and the backyard shaping world blew up overnight. It seems there was a complete ideological about face about every five years. The board shapes changed, the music, the materials, the styles changed… Now compare that twenty years - that generation of surfers, surfboard shapes, styles and culture - to the surfing time-line from 1991 to 2011. In 1991 Kelly Slater had arrived on the scene and after tearing Tressles like nobody before him, made it clear that he was slated as a world champion. Quicksilver, Billabong and Ripcurl controlled the press and competitive surfing. The longboard surfers had their own little world with a small contest series and a magazine soon to come. A divide between progressive and traditional longboards emerged and the contests followed the modern style while the movies showed the traditional style. By 2009 almost nothing in surfing had changed for well over 15 years! Then there was a pulse of change with the re-introduction of wooden surfboards, craftsmanship, surfing for fun and the re-ignition of experimental shaping. Finally the emergence of the alaia, the interest in finless surfing and the rise in popularity of retro-themed surf contests had surfers scratching their heads and opening their eyes. A finless division at the 2011 Noosa Surfing Festival was a crowd pleaser and the Burleigh Heads single fin competition, so hotly contested, has become a regular event. Slowly there is a change of consciousness. 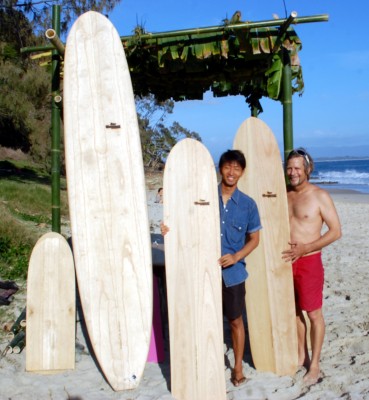 The last generation of surfers hardly experienced the excitement that the previous two generations of surfers enjoyed. Feeling the stoke, witnessing the exchange of ideas and open-minded discussion and viewing the many surfboards at the Byron Festival gives me hope for the next generation. With access to all types of materials and processes for board building, wetsuits, resources, travel and safety gear we have many more comfortably accessible waves and options than any other generation before. 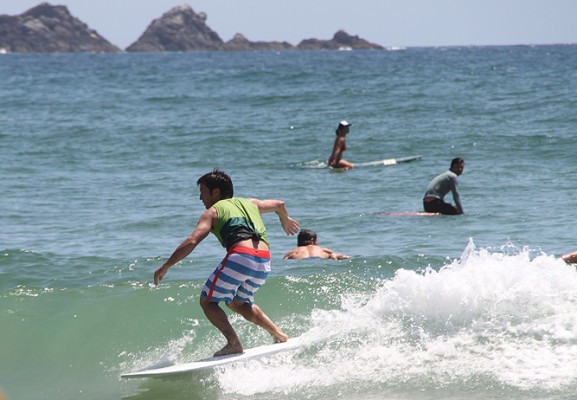 Seeing through my son’s eyes, I think surfing is looking at its roots in awe. Literally six years ago finless surfing was unheard of. Few had heard of the alaia. Ten years ago wooden surfboards had been largely forgotten about. Surfing was seen as a thoroughly modern phenomenon. And yet currently, surfing is now being viewed as an ancient pastime; possibly the oldest, continued sporting pursuit with roots and stories still to discover. The last thirty years have been about making surfing a sport. For the next generation surfing will be about living and embracing the lifestyle, with all the joy and freedom it has to offer. 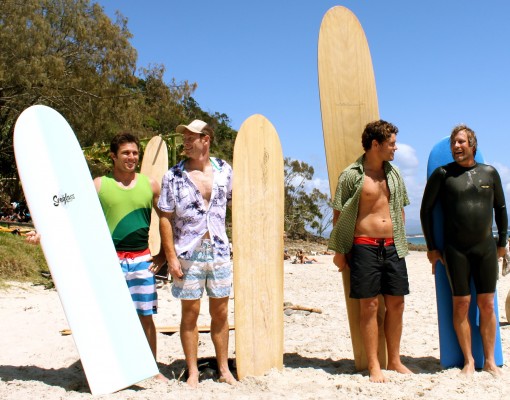 Alternate craft and open minds for the Expression Session